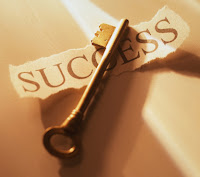 "If the ax is dull, and one does not sharpen the edge, then he must use more strength, but wisdom brings success," Ecclesiastes 10:10.
Surrounded by those who go after their dreams, no matter how much adversity is faced along the way; I thank God for where I am in my life. I thank Him for hope, I thank Him for grace, and I thank Him for mercy. I choose to focus on the good things that He has afforded to me rather than dwell on the negative distractions. Isn’t it a good thing to thank God along the way to where you ultimately want to be?
As we celebrate Father’s Day this month, I thank God for a father who did what he knew he could do rather than succumb to what society says he can’t. I thank God for men in my life who are pillars of strength, shunning the image of a black man who’s weak, compromising, and prison-prone. Isn’t it a good thing to thank God for who is in your life now along the way to embracing those who will eventually will be there?
Failure comes in many different forms and it’s meaning varies depending upon whom you may ask. For some, it is in a relationship that doesn't work out, for others it may be in a career path where you can't hold a job, yet let us consider that in God you can’t go wrong. It all depends on how you look at the situation, are you looking through rose-colored lenses or the death-defying shades of negativity? Things may not always go your way, but consider that it is going the way it’s supposed to. What God has for you is for you, and as long as you make Him the head of your life, you’ll never fail unless you stop trying to succeed.
In this issue, Renarda Williams presents an interview with author/talk show host Tavis Smiley about his new book, Fail Up: 20 Lessons on Building Success from Failure. Insightful words from a man whose failure provided stepping stones to where he is today.
___________________________________________
Tavis Smiley on Building Success from Failure
By Renarda Williams

In today's society, no one is exempt from setbacks and failures — whether he or she is a renowned (or not so renowned), clergy, educator, attorney, physician, political figure, or scientist. Everyone has experienced some type of failure in their lives. And they had to start all over to succeed and achieve lifetime goals.
Tavis Smiley — a successful business owner, notable philanthropist, host of his own national and radio programs — is no exception. Who would ever believe Smiley experienced setbacks such as: being fired, arrested, and turning down a major television opportunity and risking his future in broadcasting. Well, he did ... and all of these — and more — describes what Smiley faced during his “success scars.”
Smiley shares his "success scars," and how he overcame them, in Fail Up: 20 Lessons on Building Success from Failure (Smiley Books, 2011). Smiley has created a "remarkable" blueprint, with Fail Up, to help people overcome failure — by learning from disappointments, setbacks, ... — in order to achieve success in life.
Here are some of Tavis’ 20: Quotes from Fail Up (courtesy of Smiley Books)