In the Midst of it All

This month houses the National Day of Prayer (May 6, 2010). It’s an opportunity to come together and collectively honor God. I don’t express my love for a generic god rather respectfully honor the Father, the Son, the Holy Spirit—the One true and living God. In doing so, Christ teaches me what love is and in knowing what love is, I humbly honor mothers as we also celebrate Mother’s Day.

Through mothers, God allow children to multiply upon the earth. Isn’t an honor to pay tribute to those who take part in shaping a young person’s life? We celebrate women who share not only hot meals, but warm hugs and tender words of encouragement. Mother’s Day is a reminder of what many of us offer all year round—love.

In this issue, contributing writer Renarda Williams shares interviews with two influential individuals of our country. First, Terrence Roberts, one of the nine black students who desegregated Central High School in 1957 (commonly known as the Little Rock Nine), and then Martha Hawkins who successfully turned her life around with the help of God to create Martha’s Place, a restaurant frequented even by those in Hollywood, California.

Later in The Testimony Corner, read about one woman’s journey of realizing God’s powerful hand of favor spanning generations of her family. She unfolds her strength to choose life even in the darkest moments.

As a 15-year-old eleventh grader, Terrence Roberts was one of the nine black students who desegregated Central High School in 1957. Though unpleasant, the experience gave Roberts the opportunity to grow, develop his personality, and understand the magnitude of the conflict between him and whites who believed he didn't belong there. He also learned how to overcome life’s obstacles.
Roberts shares these conclusions and more in his memoir, Lessons from Little Rock (Butler Center Books, 2009), which he presented at a Sept. 22, 2009 book signing and lecture held at the Main Library's Darraugh Center. The event was hosted by the Butler Center for Arkansas Studies.
Roberts—who owns a management consulting firm in California—state that he learned two lessons from Central High. “First, [that] the institution of segregation was so entrenched and [white] people did what they had to do to preserve it. Second, I see that segregation continues to play a [major role] in American society today.” America never had integration, Roberts concluded. “Integration will never happen in America until racism, discrimination and segregation are eliminated.”
The election of President Barack Obama did not in itself change America's racial attitudes or empower blacks, Roberts believes. He pointed out that blacks had to empower themselves before Barack Obama was ever elected president.
“Obama will not change much,” Roberts stated. “But the most important thing today—[along with improving the education, economy, and health care]—is to close the division that exists among Americans.”
* * *
Martha's Place: A Product of Faith, Determination, and Hard Work
By Renarda Williams 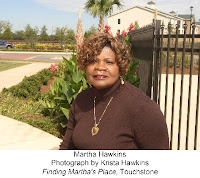 An abiding faith in God, along with hope and hard work, enabled Martha Hawkins to overcome despair and darkness to find success in life. That success culminated in Hawkins' ownership of Martha's Place, a famous restaurant in Montgomery, AL.
With the help of Marcus Brotherton, Hawkins discusses her life experiences and the creation of her business in Finding Martha's Place: My Journey Through Sin, Salvation, and Lots of Soul Food (Touchstone, an imprint of Simon and Schuster, Feb. 2010). Hawkins' manuscript was so well-written; Simon and Schuster made no changes before publishing it ... a rare occurrence.
Finding Martha's Place is a great example of how the biggest obstacles can be overcome if the desire to succeed is strong enough. Readers will find out how Hawkins triumphed over poverty and depression and created not just a restaurant, but a "home away from home" filled with spirituality, love, and joy. A restaurant often peopled with celebrities such as Whoopie Goldberg, Sissy Spacek, Ty Pennington, and Angela Bassett.
Speaking of food, Hawkins shares recipes for some of her mouth-watering dishes, including Southern Baked Catfish, Fried Green Tomatoes, Sallie Hawkins's Cornbread, and Perfect Pecan Pie.
In a telephone interview, Hawkins talked about hardships, inspiration, and her goals for the book.

RW: How does it feel now, after experiencing so many obstacles in your life, to be a renowned restaurant owner?
MH: God carried me through pain and suffering because He had a plan for me to fulfill. And it was ministering to people [through] with Martha's place.
RW: Besides God, how much of an influence was your mother in you creating Martha's Place?
MH: My mother did not just influence me to create Martha's Place, she influenced me with her spiritual life ... I saw how powerful her faith was in God. She always said, 'you have to take your burdens to the Lord and leave them there…'
I also watched how my mother cooked with [such beauty and grace]… and how she invited people in our home that we did not know. She [always] believed nobody was a stranger.
RW: Do you think your restaurant has brought a lot of joy to your customers?
MH: Yes! I believe that it has been a blessing for people to come to Martha's Place. It is not your normal restaurant. People come here to network because it is a place of peace; and [they] know that the Holy Spirit exits here.
Some people ask me to pray for them. Sometimes I pray with them at their tables; or I'll take them upstairs to pray.
RW: What do you hope to accomplish with your book? Inspire faith in people? Inspire entrepreneurship? Let readers know they should never give up on a dream?
MH: All of the above. It's also all about God and Jesus. ... You have to see yourself doing something different to create a successful business that will meet the needs of the people. Don't give up on your dreams. Trust in God and dare to dream!
_________________________________________________
The Testimony Corner
(Permission not given to provide the contributor’s name)
“God gives Life”

Jonathan, born to a single Mom—Katie who became pregnant after a short relationship was carried to term rather than aborted. She chose to have Jonathan despite the fact of being abandoned by the father of the child. Katie knew she could not share marital intimacy with the man she thought loved her, but felt awful that her child would grow up without a father.

Jonathan grew into manhood and married a lovely wife. When they learned they had a child on the way, Jonathan decided to search the records hoping his baby son might have a grandfather. When he made contact, the man refused to meet with him, saying he wanted absolutely nothing to do with Katie or him.

At that point Jonathan and Katie made a decision; the new baby would be named Jonsson. The unusual spelling of the name, Katie told me, was because when Jonathan first held him, he looked into his tiny baby boy’s face and spoke softly, “We are going to name you JONSSON. You are my always and forever son. You will never be rejected by me. Your name will remind both of us whose son you are.”

I thought of this story my mom shared the night before we left to go overseas as missionaries, in 1950. Mom had kept a secret locked in her heart from when she was previously pregnant with her eighth child. It was when she and Dad had recently lost a ten year old daughter. Mom had not been able to stop grieving. She did not want another baby. In desperation, she bargained with God that if He would make her want this child she would give it back to Him. I was that child, the only one of our family to go into Christian service. God had kept His word and without my knowing the story at the time, He called me into His service.

My own experience is the rest of the story. With my husband, we had 3 children ages 2, 3 and 5. I was disappointed when I suspected number 4 was on the way. The doctor who confirmed it asked, “Do you want to get rid of 'it'?” I was shocked! I said, “Oh my, NO!” That son is now the senior pastor in a historic church, a beloved young man, teaching and sharing God’s Word, greatly loved in his growing church ministry. I could not be more thankful that God had us keep our son. It is the proof that God has a purpose in the birth of each of us: Jeremiah 1:5 and Psalm 139.

“Before I formed thee in the belly I knew thee; and before thou camest forth out of the womb I sanctified thee, and I ordained thee a prophet unto the nations,” Jeremiah 1:5, KJV.

As we celebrate Mother’s Day this month I ponder on the gift of life God has given each of us. We all have been placed on this earth for a purpose. We aren’t randomly taking up space in some large over accommodating vacuum. It is a journey unfolding with new possibilities each day. God is in charge.

To all of the mothers or those who act in such a capacity, I pray the Lord shines upon you. Not only on Mother’s Day, but each day of the year.

To submit a testimony or an article for contribution, please email me at renee@reneeallenmccoy.com
Posted by Renee at 12:03 AM No comments: